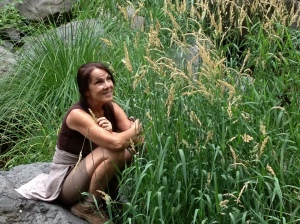 I went out last weekend for a walk along the Sacramento River. There is a lovely river trail that I have visited many times when I was growing up as a child. In the early 60s my father and I used to fish up and down this area, catching rainbow trout. I learned how to swim in the ice-cold mountain water of Soda Creek when I was eight years old. I have many fond memories of this area.

But on that day I saw it with different eyes. I crossed an expansion bridge and entered the trail. We enjoyed the little babbling brooks that emptied into the mighty river. The earthy scent of moss filled the air. Spring flowers poked their nodding heads out of thick mossy patches on ground. It was a lovely day.

As I arrived to one of my favorite places to sit on the trail, I looked out at the river and gazed at ancient lava rock that created a strange formation along the water. Behold it was a river dragon! His head looked like an alligator laying in the water. His body rose up, creating an excellent place for fishing.

I went to walk out on the rock to discovered another dragon whose head and body faced the shore. Two dragons were joined together on the river. So many times I had been in this area but I had never seen them until today! A few feet a way from this area was a huge stone shaped like a yoni (vagina). Remember dragons are about fertility.

You could stand on the dragon’s back and watch the river go by. There was a perfect wading pool, created by the dragon’s body. It was calm and soothing, sheltered by trees. A few yards before the dragon’s head, coming from the east, a stream joined the great Sacramento River.

Some of the trees in the area had shapes within the bark that looked like a Mama Nature Goddess. It was the home of the elementals and the dragons were the guardians of the river.

I repeated mantras that benefit the dragons. One mantra is Chinese, Namo Long Tow Guan Yin. This mantra means Kuan Yin’s Dragon. Namo means the sacred name. Long is the word for dragon in Chinese. Guan Yin is another name for Kuan Yin. Since Kuan Yin’s presence is already manifesting on the mountain I like to present the dragons to her when I make offerings. Many of you may have seen statues or paintings of Kuan Yin riding a dragon and holding her sweet nectar bottle. Kuan Yin is the Goddess of Mercy. She is a Bodisattva, one who has vowed to alleviate suffering. Her name is Kannon-sama in Japan. She is also known in Korea, Thailand, India, Tibet, and Vietnam, by many names. Her name may change in different regions of Asia but she is the one who hears the cries of those who suffer in all realms. She is able to manifest in any form she chooses to help those in need.

The Sacramento river back in the early 90s had a very terrible environmental accident. There was a train wreck and one of the cars filled with weed killer fell into the river. It killed everything as the rushing currents took the poison downstream. Even though the fish have come back and plants have returned, the memory is still secretly recorded on the earth.  The outside may look like a rock in the shape of the dragon but the inner realm is the spirit behind the land that feels and remembers this pain. Therefore, mantras to Kuan Yin bring blessings to nature’s elements .
The French Connection

A few days ago a man by the name of Olivier called me. He had just come to Mt. Shasta from France. He saw my dragon article in the Mt. Shasta Magazine and asked me if he could meet the dragons. I planned to take him to another place but I wanted to stop first on the river to show him the river dragons.

As we walked the trails the magic started to happen. We saw one dragon after another as we made our way down-river. We first saw two lava flows that were in the shapes of dragons. But then we noticed that the trail itself had moss-covered boulders that created a giant dragon body right up against the trail. A few feet further set back was another dragon being created from the decomposed tree stumps. I realized he was a destructive dragon. Not in a bad way mind you, but he ruled over the cycle of composting all the old tree matter back to the soil. I began to explain to Olivier how in a forest there exist three cycles. These cycles are new growth trees, the mature trees and the destructive cycle of the decomposing. When a forest is healthy all three cycles become balanced.

Once on a different hike I came to a place where a lot of beer drinking and hunting had taken place. The trees were full of disease and very unhealthy. Trees not only purify our air but they also purify the thoughts and feelings in an area. When the absorbs too much negativity , disease sets in and the forest becomes sick. I have seen this over and over in my travels.

Once I went to the high alpine area where very few people visited. The destructive cycle was there also but the trees decomposing looked like beautiful art sculpture, shaped by the elements of wind, rain, ice and snow. This place was pure and not tainted by human negativity.

Olivier and I looked down at a rock after my explanation. There was a rock looking like a Madonna and child. I pointed her out to Olivier. Then I, “Here it is recorded. The baby is the new growth cycle. The mother the mature cycle and the destructive dragon is the compost cycle. It has been written rock, stone and moss.

We traveled further and walked out on the river dragons. Olivier wanted to purify himself in the river. We went to the dragon pool. He folded his hands in prayer and reverently entered the pool.