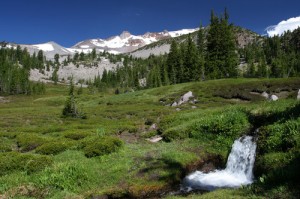 One summer I was so busy finding the dragons on Mt. Shasta that it was not until late summer did I find my way to Squaw Meadows. Squaw Meadows is one of the more popular place on Mt. Shasta for people to hike into. Remembering the information that a Japanese man had told me, where there is one dragon there is always another. Just like the kundalini traveling up the spine through multiple channels in the process of awakening. The earth also has its kundalini channels in the form of dragon energy. I realized that Green Butte, the double headed dragon, and Grey Butte were two of the dragons. But who was the matching dragon of Red Ridge?

I made my way up the steep climb of the upper meadows to find the source of the squaw creek. I sat at the top of the creek, looking closely at the Red Fir Ridge. I knew the dragon was there but I could not find him. I slowly made my way down the trail. I knew this ridge was a dragon -but where was his head? I stopped right where a small spring meets with Squaw creek. I just stood there deeply looking at the beginning of the ridge that faces north. Every dragon I had met on the mountain so far – their heads were always facing the mountain.

And then I saw him; half of his head was sumerged into the earth. But where was his eye? It is only when I can see the eye of the dragon that I know I have found him. And there it was – slanted and mysteriouly hidding from all those who walk by. He was the fourth great dragon of Mt. Shasta.

Now my attention turned towards the trickling spring that was flowing from the east. In Tibet springs that run from east to west are considered very sacred. The monks gather the waters from these springs for ceremony. The spring source was coming from a vulva-shaped mound which was green and growing. Symbolically speaking, Squaw was the white man’s word for vagina. When they came to the Native American tribes they used this word for wanting to have sex. This says a lot about our white ancestors.

The dragon ridge was directly behind the spring. The tree line went across the dragon’s back. The red fur trees all grow about the same size except the trees that were directly in alignment with the vulva mound. These trees were big and fat looking like strong phalic symbols that fertilzed the sweet earth. It was a place of union of the male and female united in the natural enviroment.I now had found the fourth dragon on Shasta.