Venus with her Mirror

I lived outside of Paris for a while in St Cloud. This was the first time I had ever lived in a major city for many years, being a nature girl the city always had its draw backs. But nevertheless St Cloud had a park that some times was referred to a Le poumon de Paris, “The Lung of Paris.” and it became my playground to visit Mother Nature.

The Garden of the Moon Goddess Diana and consort Virbius, God of the Woods

Parc du St Cloud was where the Gods/Goddesses still live. This park has, fountains, wooded forest,  intimate gardens and a panoramic view of the city of Paris. It was only a short 7 minute walk from my house and I found myself walking through the gardens of the Queens.  It was known for La Route des Rois  “The Road of the Kings” which is lined with a straight row of trees and a round-about with a carriage drive by view of the statues of the Gods and Goddess.

Catherine de Medici Italian princess who became the Queen of France was quite the pace maker of high fashion in her day. She made it fashionable to wear scented gloves, which was the beginning of essential oil business of France. But later during the French Revolution to be caught with the same scented gloves was a dead give away you came from a royal bloodline…so off with their heads.  Queen Catherine also inspired the style of planting trees and art sculpture for the nobility’s carriage rides, thus La Route des Rois.

The Frozen Grass one Morning in Parc St. Cloud

During the  winter months I pretty much had the park to myself where I wondered though the Garden of Diana or formal french garden with its straight lines and symmetry. Acres of wooded forest, fountains and secret hide aways for lovers to steal a kiss without being seen became part of the fabric of my daily walks.

St Cloud’s chateau originally was built by the Gondi family in the 16 th century. It was later became a gift to Marie Antoinette from her husband, Louie XVI.  It became one of Napoleon’s favorite resting place outside the city of Paris.  The chateau was destroyed in a fire 1870 during French/Prussian wars.

The Park  is one of the most famous examples of 19th century history.  Andrea le Nortre a famous formal garden designer created the gardens. 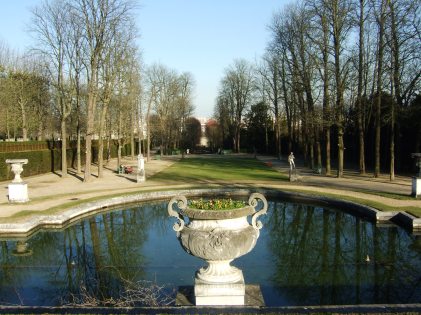 Parc St Cloud became my  connecting ground with Mother Nature. It was not far from the  Great River Seine which most likely help provide water for the many fountains through out the park. 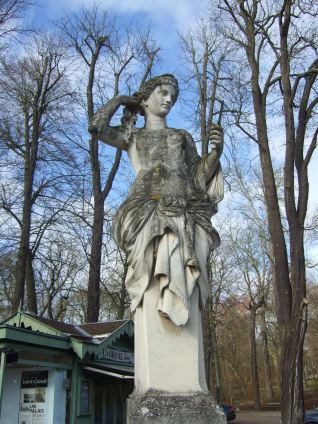 During the weekends the park provided a place for families to gathered with their children for picnics or an old fashion french puppet show. The old men would gather for a game of batcha ball. And for myself I would be in my usual tree hugging, listening to the wind and taking  photos of Gods, Goddess, and any Nature Spirit hiding in the bark of trees.

A Tour Book to the Sacred Sites of France.