Once upon a time a handsome Prince was facing a great challenge, for his Lady Fair was locked high in a tower. Her hair shone with the infinite light of the sun. There was no door in this tower only a window where the Princess would comb her long hair detangling her own unconscious programs.
It would take courage to climb this tower thought the Prince. He would be unsure of his footing in such a challenge. But one day he could no longer stand the yearning to meet this maiden face to face. And the only choice the Prince had was to climb the tower of consciousness to meet his true love. So he stood below calling out ” Rapunzel, Rapunzel , let down your Hair of Infinite Light. ” Rapunzel looked down from her window and was so happy to cast her braid down to the Prince for she also longed to meet the him.
First the Prince made and effort to climb Rapunzel’s braid but he found his heavy armor made it to difficult. So he took off his armor pants and found he was much lighter and more agile.
He began his climb. Even though he cast aside part of his armor to make this steep climb but every step up the tower he became more fearful and was ready to stop the whole process to run to safety again. His fear began to over take him and his thoughts began to whirl around his head. Rapunzel looked down from the tower and gently called out to him in a voice that sounded like the whispering winds of the soul. “Let go of your helmet and trust.” The Prince took a deep breath and loosen the strap of his helmet and his helmet crashed to the earth below. Now the wind was blowing in the Prince hair and he felt more freedom and his thoughts seem to ease.
But as he approached his goal his hands began to get very tried. Again the Princess looked down from the window and seeing the Prince she knew in less he let go of his breast-plate he would not reach his goal. Again Rapunzel whispered most gently to the Prince let go of your breast plate take courage of heart. The prince again had to make a decision to release the last of his armor the breast plate that protected his heart. He looked up to his lady fair and released the last of his armor that came crashing to the earth. Now he was lighter and easily made the very last of the climb to his Princess. 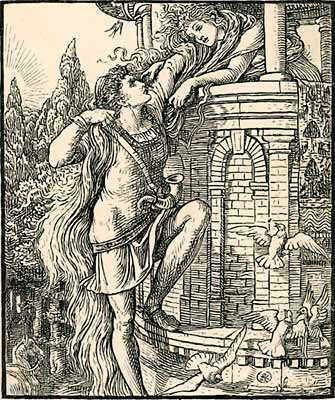 Rapunzel help the Prince through the small opening of the window. He was standing before her exposed stripped of all his armor. The princess stood before the princes and with one motion she pulled on ribbon and her robe fell to the floor. She was standing naked, exposed, vulnerable before the prince. She gently looked into his eyes and he looked into her eyes and he found himself within her and she found herself within him. And they learned the truth of intimacy and how to be fearlessly and open their heart in kindness and acceptance of each other.
The End