Our Lady Regla in Miami

My son Sheenon invited me to Miami last week and just by chance I decided to see if  a Black Virgin was in the area, since I know Miami is a very Ethnic community.  And low and behold I found Our Lady Regal who can be found in Little Havana in Miami. She has been one of Cuba’s Black Virgin bought by the slave ships from Africa.  But there is a deep root to this primordial Madonna under her blues skirts is the Ocean Goddess Yemaya.  She is Goddess of Living Oceans and known as Yemanja in Brazil.

That night after looking her up on the internet I knew I had to go see her. When I feel asleep that night I had a vision of her and could feel the power of her magnificent presence.  I woke up the next morning and had a call from Olivier Vinet who has a radio show in Paris and he asked to interview me about the Black Virgin the same week of the pilgrimage.  It did not stop there this seed exploded into a full blown pilgrimage of 17 women on Facebook also going to other Sacred Sites it became  a Global Pilgrimage . Which was created in 76 hours of having the vision of Our Lady Regla. So I was off to a flying start.  There is one other synchronicity occurrence that happened at the beginning of connecting with Lady Regla was Marguerite from   Earth Alive Video asked me to create a Water Blessing Ceremony for a gathering of the Sacramento Head Waters here in Mt. Shasta.  And it seem it would be perfect to go  Our Lady of Regla the Madonna of the Living Waters on Earth before such an event.

Once I arrived in Miami I was blessed with a warm welcome from my son Sheenon. And got to see the new spa he and his partner Anna have opened in Miami Beach. Alma Salon. There I was pampered and treated so graciously by everyone I meet.  Since it is a beach town a lot of traveling was done on the back of Sheenon’s vespa.  Which is the only way to do the island of Miami Beach in less your are going over to the continent, Sheenon would say.

That morning I prepared my offerings of hundreds of people’s names and prayers I had collected on Facebook .  My friend Fawn sent me to a woman by the name of Tanisha Rose who knew the ends and outs of making offerings to Yemaya. She told me to make sure I included children’s prayers and offerings for mothers who needed support that this was important to Lady Regla. And she suggested to use white and blue ribbons, and silver bells to wrap up the prayers. When I was flying over the USA right before we landed in Miami American Airlines did a collection for food for children by donating the change in one’s purse. I emptied the change from my wallet remembering I was on pilgrimage to Lady Regla.  I have also known times in my own life, what it meant not to have support as a mother with children.

A few days in Miami Beach the day had come to go to little Havana to meet Our Lady Regla. I was going to meet my dear friend Dora with a couple of her friends later at the shrine. Sheenon dropped me off and I was on my own to be greeted by a priest that brought me into the chapel.

The chapel was old school and it was an Orthodox Church not Roman Catholic and the priest was Cuban.  I walked in among hoards of saints, angels and flickering candles. And there in a prime position between the four arc-angels Michael, Raphael, Gabriel, and Uriel at the center of the altar was Our Lady of Regla.  I must have been there for over an hour just sitting in pray and meditation in front of the Madonna. I allowed myself to read the prayers on the list and many of the people’s request, knowing that in such a Sacred Place prayers can be answered and shifts in people’s lives are possible. The more I got quiet the energy of this place began to pour down like a waterfall of grace.  Just about then I turned around and there was my friend Dora with her friends. I hugged Dora to only find so much love and energy increasing. We stood there embracing each other like only  deep soul friends can do. It was a very precious moment. Now the party became four of us sitting in the pews enjoying the immense power that was being given through Lady Regla’s grace.

When we left we were greeted by two priest that answered the many questions the ladies had a bout the site.  Juliana one of the ladies with Dora had another church she wanted to visit not to far from where we were. It was another Madonna from Cuba that saved three people from a storm on a small boat.. This Madonna was called Nuestra Señora de la Virgen de la Cardidad, Our Lady of Charity.  The following is a testimony of Juan Moreno:

General Archive of the Indies of Seville, a written testimony of Juan Moreno

Having camped in the French Key, which is in the middle of the Bay of Nipe, waiting for a good time to leave for the Wabba mines, being a morning of calm seas, they left the French Keys, before daybreak. The afore mentioned Juan y Rodrigo de Hoyos and myself, embarked in a canoe, headed for the Wabba mines, and far from the French Key we saw something white above the foam of the water, which we couldn’t distinguish. As we got closer, birds and dry branches appeared. The aforementioned Indians said, ‘It looks like a girl.’ While they were discussing, they saw an image of Our Lady, the Holy Virgin, on top of a small wooden plank, holding the baby Jesus in her arms. On this small tablet, was written in large letters, which read , ‘I am the Virgin of Charity.’ Looking at her clothes, they realized that they were not wet.

This statue became a very important Icon for the Cuban people and the church is dedicated to her resides in Miami next to the sea. 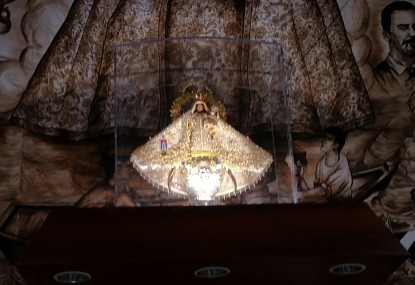 Later this  same Madonna served as hope and safety to over 30,000 Cuban that were exiled from Cuba making their way to the USA on small boats seeking their freedom.

Pilgrimage does not stop after the visit to a Sacred Sites over the next few days beautiful occurrences happened to me from the creation of a song when I was walking on the city’s streets. I  heard the musical beat of the city in the wind , trees and the sound of the ocean waves. The mixed rhymes of Cuban, Latin and African.

A visit to the beach on Sunday afternoon brought me to the waters edge praying again to Our Lady Regla but this time I found her in the larger sense her whole body was the Oceans it self and the monsoon rains that came in during the late afternoon. Her rhythms were found in the flapping of palm fonds and the tide that ripped across the ocean waves. And when I pressed my feet into the wet sands and the waves would meet me with each prayer I whispered.  And she baptized me as wave after wave would slap my tummy, my breast my legs purifying me of all things not needed.  This was the body, heart and soul of our Lady of Regla whose name means Rule. But as I sat there on the beach feeling all of nature around me it was not the rules of religions this Black Virgin followed but the rules of Nature’s Laws. Nature rules are written in the season. Her Holy Scriptures are written in the flowers, the trees, stones and seashells left behind on the shores.  It is natural laws that are now need to be followed ! That all species can live once again in harmony.  And it is through her grace our eyes are opened to her beauty and it through our alignment with Sprit and Nature we will create a harmony within ourselves, then with each other and with every living thing.

Note:  Why the Black Virgin? New DNA testing has found all human DNA has originated  out of Africa .This might just be why the primordial Black Virgin Shrines have with stood the test of time and hold a memory of our original origin . The Black Virgin memories are recorded in our very own DNA.  “Advanced DNA testing combined with recently unearthed discoveries are bolstering the belief that if you look back far enough, all living human beings are the descendants of a small, innovative and ambitious set of people on the African continent.”  quote CNN