I find myself living very close to a small mountain here in Oregon called Mary’s Peak.  I have been exploring this area taking photos of the spring wildflowers. Since so many flowers have been dedicated to St Mary over the centuries it made me wonder. Was Mary’s Peak named after Mother Mary? This threw me into researching how this mountain got its name.  I came across an article in Corvallis Gazette that gave me the answer.

But is was in the early 1800s the Hudson Bay Company’s French fur traders established their camp within the sites of what is now Mary’s Peak. The French were called Voyageurs and were known to inter-married with the Native American women. They settle in what is now called “French Prairie in Marion County”.  The Voyageurs being Catholic honored this coastal range and named it after the Virgin Mary and called it  “St Maries”.

The Methodist Missionaries came to the area in 1834 to convert the Indians that were still remaining in the Kalapuya tribes.  Many Natives died from being exposed to the whites man’s diseases. The settlers poured into the Oregon Territory making land claims. The population being mostly Protestant dropped the name of St Maries to Mary’s Peak.

This small mountain height is only 4,097 feet but is the highest point in Oregon’s Coast Mountain Range.

The spring flowers are blooming on the mountain at this time have inspired me to re-dedicate “Where the Spirits Dwells” to St. Marie Peak.

Honoring the flowers that grow on this mountain to St. Marie.

Violet in Europe Sacred Flora to Mother Mary were known as  Our Lady’s Humility May our egos be humbled to learn we are just one small part of this Nature’s Web of Life.

“May we learn how to be nurture from this Earth and in return nurture Nature with our Awareness and our choices for the future generations.” 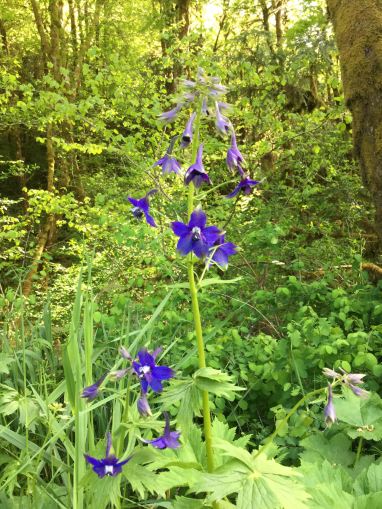 Known as Mary’s Tears in Europe, When  I see so much devastation from the logging industry in our forest even in the “Water Shed Areas” it is something to shed tears for.

Many of the orchid family were dedicated to Mother Mary in Europe referring to her slippers. “May we learn to walk gently on this Earth and listen to the Spirit of St. Mary’s Peak”

Disporum hookeri
Hooker’s Fairybell
There is a silence in the forest and gentleness found in the most delicate of wild flowers when we allow ourselves to feel such things we shall know true peace.

Bleeding Heart is part of the Sacred Flora known as ( Mary’s Bleeding Heart). May we open our inner ears to the Heart of the Earth. May we listen may we create  change to preserve and protect our environment.

Trillium flowers are a part of the Sacred Flora of Europe dedicated to the Trinity. There is a trinity within man. It is when our heart, mind, and soul are all in union. It is from this preceptive we can align with Nature’s rhythms and live in harmony.