The Stone Facade of Notre Dame in Paris

The Crayfish, John the Baptist and Mary Magdalene 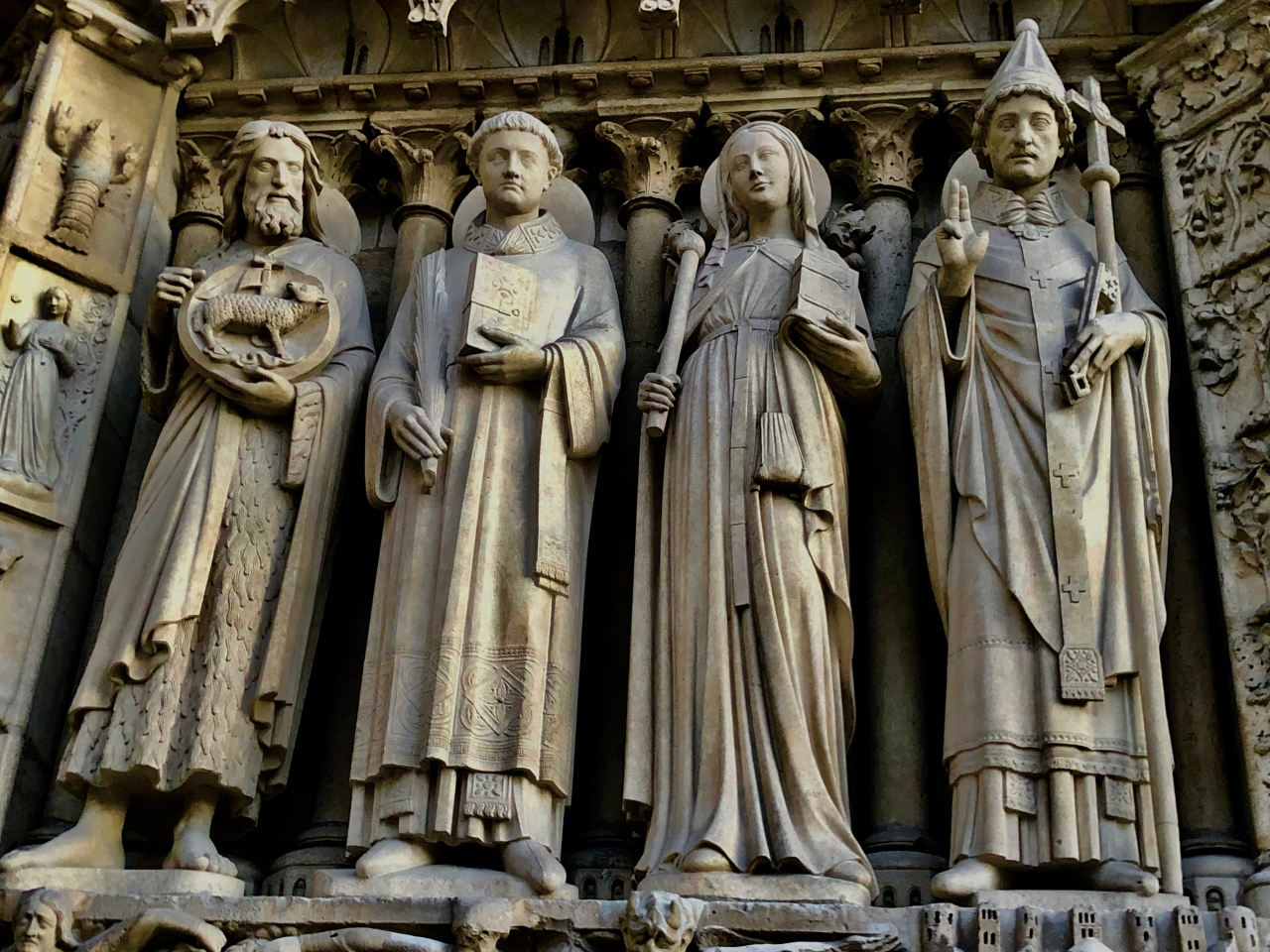 The following account is primarily excerpted from my book “Mystic’s Journey to the Sacred Sites of France”  the update version can be viewed in my new book in the next 3 months.

“As I stood in the front of Notre Dame in Paris,  while looking at the left door of the Cathedral,  I noticed a stone relief with a crayfish.  The crayfish on the stone relief is just like the crayfish on the Moon Card of the Tarot.  It is my perspective and some theorists that the face of the wall of Notre Dame is representative of the Lunar Great Goddess Isis.  The crayfish in the Tarot appears to be hiding in the depths of the water.  Perhaps it cannot leave its watery domain because there are two angry dogs, which represent King Philip of France and the Church.

When I first saw this carving of the crayfish on the wall of Notre Dame, it was right next to an image of Mary Magdalene and a rose vine.  The rose is the symbol not only of the Virgin Mary,  but Magdalene’s bloodline was referred to as the Rose-line.  Notice that a man is peaking around the conner looking at Magdalene.  He is hiding.  This is a clue to look deeper into what is hidden in the stone relief.

Notice how the woman in the image stands directly on the root of the tree.  This is a symbol that Magdalene is the root of the Merovingian Lineage.  The lily is the flower of the Virgin Mary and the triple lily in the stone relief is the symbol for the Mother Lineage.  This female lineage began with Saint Anne,  who was the grandmother of Jesus.  It continued thru Mother Mary,  who was the mother of Jesus and then through Mary Magdalene,  who was the wife of Jesus.

To the right of the crayfish is John the Baptist.  He is holding a circle with the image of the sacrificial lamb.  The revelation of the heresy behind these images became apparent to me.  The Templars were known to have a high regard for John the Baptist.  There is a reason for this.  John was actually a title for a lineage holder in the Gnostic Tradition. This tradition began with the Johannites.  This lineage was then passed to Hughes de Payens,  the man that originally formed the Knight Templars.  He was given this title by the Holy man Theoclete.  Hugh de Payen became the 70th John,  in a long line of Johannites,  which included John the Baptist,  Jesus,  John the Apostle and Mary Magdalene.  This title of John meant “He of Gnostic Power.”  The Cathars also used this titled,  but they called a women “Jean” rather than “John”.

The result of the Albiginsian Crusade against the Gnostic Cathars destroyed thousands of people.  The Cathars believed that an individual’s direct experience with the Holy Spirit was above the Bible.  The Cathars also believed in the blood lineage of Mary Magdalene and Jesus Christ.  This Crusade,  which was set in motion by the Pope and the Lords of  Northern France,  just about wiped out the teachings of the Cathars.   The Inquisition’s propaganda demoted Mary Magdalene to a prostitute.  The Gnostic title “John” was flipped  from being a sacred one to referring to a client of a prostitute.

Looking again at the photo of the “Line up of Stone Reliefs”,  you will notice that on the inside wall of the crayfish,  there is a stone mason at work.  Right below the stone mason is a man who is mixing  mortar.  The man who is mixing is also the one who is peeking around at the Magdalene stone relief .  Both of these images together are a trail of bread crumbs,  left by the builders of the Notre Dame.  Are these pointing out for us to look even closer,  as to what has been hidden in their work?

The Crayfish Symbol in the Tarot;

The crayfish,  for example,  is really the older image of a crab.   The crab is the astrological symbol of Cancer,  and Cancer is the sign of the Great Mother,  the Lunar Goddess.  The lunar eclipse represents the Sacred Marriage.  Do you remember the myth of the Goddess Isis and her husband Osiris,  who had been cut into 14 pieces?  When she was assembling Osiris body again,  she lost his penis because it had been eaten by a fish.  Christ is said to be born under the sign of Pisces the fish. During the early church’s history and the making of  Church doctrine, they were promoting the celibate priest.  Why could Christ not be both sexual and a Holy Man?  Why would Christ not be married and have children?  Christ was a Jew whose religion commanded to go forth and be fruitful.  This did not go over well if you are promoting a celibate life style for the clergy.  And why celibacy?  The priest or nuns would not have children, so their inheritance would return back to the church. Celibacy was also a part of the culture of Rome.  There were the Roman Vestal Virgins and the male Priests of Cybele who were eunuchs.  The Catholic Church was built over the foundation of Rome Empire.” 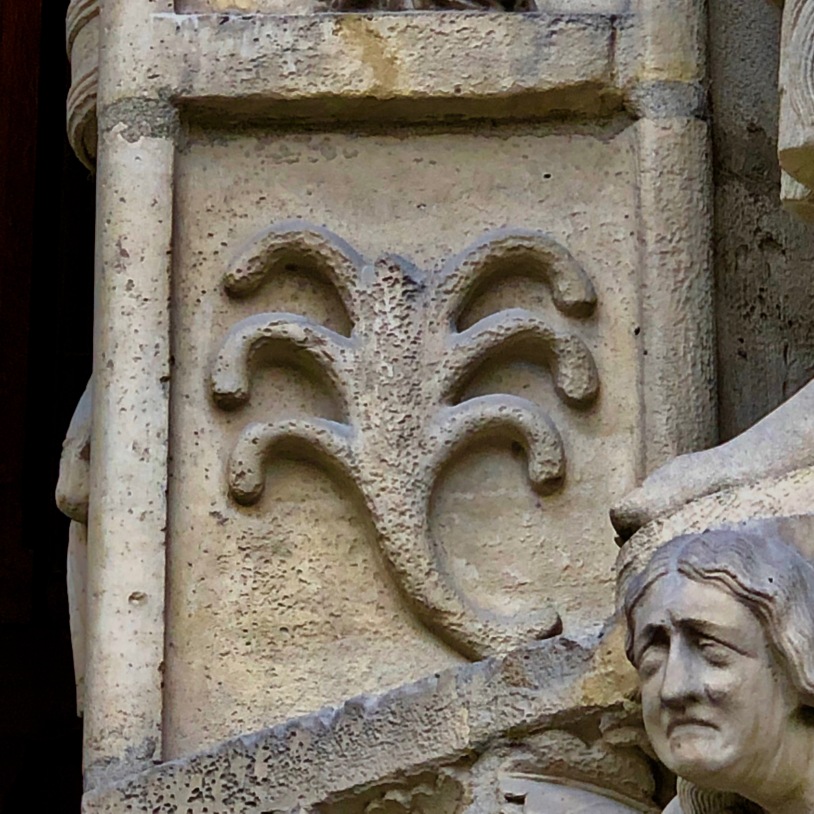 The two towers on the Moon Card are also symbolic.  The name Magdala means “Watch Tower.”  It is from the Watch Tower you have a “Higher View”.  There are also two towers on the Cathedral of Notre Dame.  The island of  Île de la Cité,  that Notre Dame is built upon, is known in Paris as “Le Bateau d’Isis,” the Boat of Isis.  In the myth of Isis, she navigated down the Nile River looking for the lost body parts of her Beloved Osiris.  When she resembled Osiris’s body,  she fashioned a lapis lazuli penis and then had sex.  She became pregnant with the  “Hawk-Eye-God Horus.”  When we look through the Eye of Horus,  we go beyond duality with the Higher View of Unity.  This Egyptian Myth is the prior foundation to the Catholic Sacrement of the Eucharist.

Christos in Greek means the Cosmic Christ.  This goes beyond the form of Jesus Christ,  just as the title of John goes beyond the form of the Baptist.   John the Baptist prepared the way for Jesus Christ through Baptism,   just as the experience of  “Gnostic Wisdom” prepares the way for us to have the experience of our own Inner Light.  When we have this experience, “Christos” can then be viewed as the Spirit of Love.  The Spirit of Love lives in everything and every person,  beyond religion, culture,  and race.  The life of  Jesus Christ opened the door for us by his example and his own inner realization.   The Christos is found in each one of us and also in the Body of Christ that en-compasses everyone on the planet.

“Pure thought,  fueled with deep longing,  is the boat to arrive on to the shores of Divine Presence.  But once you arrive,  one has to abandon the boat of thought and merge with the experience of the Divine Presence, which is void of thought,  pre-conceptions and doctrines.  We understand the existence of Higher Divine Intelligence,  not through being told what we should believe,  but through our own direct experience.  Everything short of this is just another person’s perception of how you should experience.  This is an individual journey into the uncharted waters of the soul.  There have been many saints and holy ones that have left stepping stones and markers along the path…..but in the end,  each individual needs their own direct experience.  This is when all arguments cease.  Nothing needs to be proved because the individual has had the experience”

Back to the towers of Notre Dame,  I see two towers that are the archetypes for the Great Goddess Isis and Mary Magdalene.  Our Lady of Notre Dame is Mary Magdalene as the Consort of Christ,  like Osiris was the Consort of Isis.  The Knight Templars,  the builders of the cathedrals,  knowingly placed these symbols.  The purpose of these hidden symbols,  in Sacred Architecture,  was for a pilgrim to experience their own revelations.

The Kings of France lived and ruled on the island of Île de la Cité,  and it was said that those who were at the helm of this “Boat of Isis” ruled France.  This was one reason why,  in World War II,  the-esoteric Germans,  during the occupation of France,  set up their head-quarters at the center of Île de la Cité.

King Louie IV connected the “Île de la Cité” to the neighboring island “Ile de Saint Louis” with a bridge.  Louie IV also built his own Chapel on  Ile de Saint Louis.  This was Louie IV way of marrying the “Goddess of the Land” in the form of  the “Cathedral of Notre Dame” to himself,  as the Sacred King.  He was well aware of this ancient tradition of the Hieros Gamos. 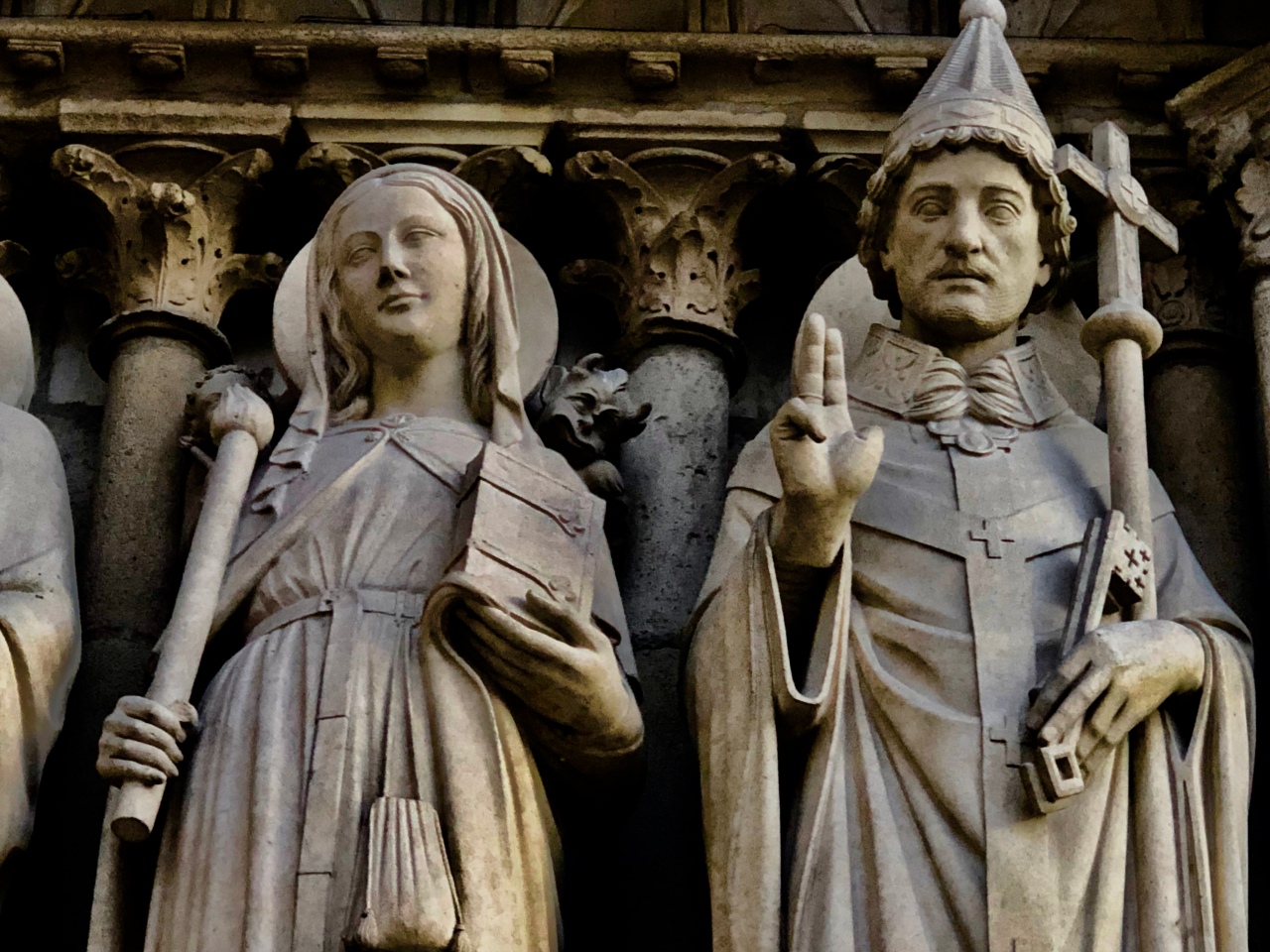 There are two other important figures not far away from John the Baptist on the wall of Notre Dame,  which are St Genevieve and Pope Sylvester.  St Genevieve is the patron saint of the city of Paris.  King Clovis and his Queen St. Clothide began building the Church to St. Peter and Paul in the middle of Paris,  with the help of St Genevieve,  who designed the floor plan.

St Genevieve is also credited to a few miracles in Paris.  One was after an epidemic of ergot poisoning,  when her relics were displayed in a street procession and 1000s of people were cured.

The second important figure in this Notre Dame lineup was Pope Sylvester,  who is now known as St Gerbert of Aurillac.  He entered a monastery at a young age and was recognized by Borrell II,  the Count of Barcelona.  The Count brought him to Spain,  where he was exposed to the Arab philosophy.  Gerbert learned mathematics,  astronomy and geometry.  His writings on these subjects brought light into the Dark Ages of Europe.

His home base became Rheims,  France,  where he developed libraries and new clerical orders.  It was in Rheims that the Merovingian Pagan King Clovis was baptized as a Christian by St Remy.  This single act changed the course France!  While living there,  St. Gerbert became interested in researching the genealogy of the the Merovingian lineage.  He later developed clerical orders,  that were devoted to the research of genealogy.

St Gerbert believed that the Merovingian linage needed to return to the throne of France.  When the childless King Louis V,  of the Carolingian lineage,  died in 987,  Gerbert then had an opportunity to influence destiny.  Even though Louis’s brother Charles of Lorraine,  was a possible candidate,  Hugh Capet,  became King.  This was because of  the previous Merovingian blood-linage that his mother carried and his close family ties to the royal houses of both France and Germany.

Below are links to different subject you might enjoy